Ross Lin was born in Taipei, Taiwan in 1986. From an early age, he showed his artistic talents and studied from secondary school to the Art Department of Huafan University. Specializing in the practical skills of Western painting, he laid a good foundation under the artistic expression. Later, under the guidance of the professors of the Institute, he gradually created his own style in the transformation between the media.

Created with oil painting media and expressed self with animals. Ross Lin  lets us meet the “it” in the depths of the jungle through the dreamlike jungle illusion. Ross Lin, who knows how to expressing human being with the theme of animals, uses the “leopard” to describe the state of mind under the repression. The leopard in the work appears to be still like a breath, but it can’t hide the pulsating life under the surface, a kind of explosive power to be stored.

In addition to the expression of inner emotions, Ross Lin uses the base treatment of three or forty layers and the pigments of the layer stacking to create a sense of time by adding round-trip sanding and creating a sense of orientalists, smoothing the surface after polishing. The three-dimensional bump pigments present a mysterious realm of real and dreamy interlacing. With the concept that he calls “ Transplanting Eastern Elements” where he tries to find the balance between the concrete and abstract and the Eastern and the Western, through traditional and modern methods.

“The dog is companionship, the leopard is a lone ranger, and art is a feeling of emotion and life for me. Through the interweaving of paintbrush and paint, I hope to convey the value of each person’s self-existence through my artworks, and show you the freedom of the mind.” – Ross Lin. 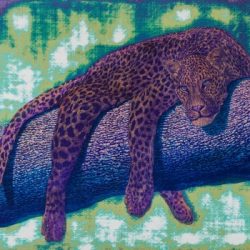 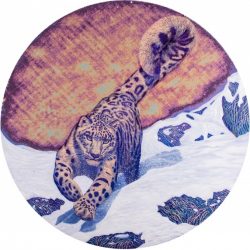