Song Yong Hua was born in 1975 in Shanghai. He graduated from Shanghai Theater Academy in 1998. Influenced by Chinese traditional ideology, Song is familiar with various traditional Chinese forms of art. In his creation, he firmly cultivates his feelings of calligraphy, ancient poetry, and painting. His landscape is full of “Chinese”, that is, the essence and essence of China in art.

Due to his theme and traditional ideas are closely related, there are new in the implementation of the novel. Song’s paintings can be compared to the visual poems on the canvas that captures the natural wonders. The space left blank contains the possibility of qualitative change, as a top priority in the composition of the painting, it plays a role in strengthening the theme. Melancholy, sadness, loneliness, emptiness, perplexity, unlimited accountability – all of these play the same role in Song’s landscapes. After that, he turned the traditional brushwork into the kernel and the Western-style, flat-framed composition as a wrapper to this core.

Appreciating Song’s works, always make us feel “natural”, feel the rhythm of nature. But all these rely on the contagious power of the artistic image in the work, not on preaching. He uses clever techniques to shorten the space-time distance between the viewer and his works, feel exceptionally friendly and natural as if feeling and contemplating the immediate life with the artist. 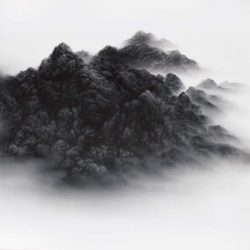